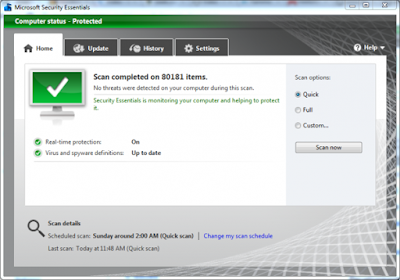 Microsoft Security Essentials antivirus application has made the biggest gains in users this year. More and more consumers download and use the free Anti virus program than any other Antivirus provider. Why not it’s free isn’t it and being a part of Microsoft which created Security Essentials has put out a usage report as of March 2012. It’s a program that is non-intrusive and lightweight on resources. Because of the automatic updating (via Windows Update) and being essentially "set it and forget it," it has garnered quite the following from tech enthusiasts that use it on their computers along with a bit of common sense for being safe while surfing on the internet.

OPSWAT, a company founded in 2002 has put out the percentages for the use of Security Essentials comparing to other big name Anti-Virus competition, which states it in the top 4% worldwide usage and the 2% usage as shown below:

OPSWAT states that the free offerings continue to dominate the charts with the most number of installations and market share. While paid offerings of protection for Anti-Virus programs continues to decline free offerings from Microsoft, AVG, Ect continue to succeed and dominate, ultimately Microsoft due to having the advantage for pushing Security Essentials through their Windows Update platform. And for me in my opinion I agree why pay for protection get it for free through Microsoft! If you have a Windows based PC then I suggest for you to stop paying for a monthly service subscription for Anti-virus protection. Microsoft Security Essentials is a perfect light, easy to use, powerful program which can help protect you from a virus and costs you Nothing! I’m not a spokesman for Microsoft at all (Even though I should be Call them for me!) but I respect their devotion in this free product and suggest downloading it from this link below:
http://windows.microsoft.com/en-US/windows/products/security-essentials
at 6:26 PM