PC COOLED BY YOUR TOILET?
Cool Your PC From Your Bowl, Toilet Bowl That Is!! 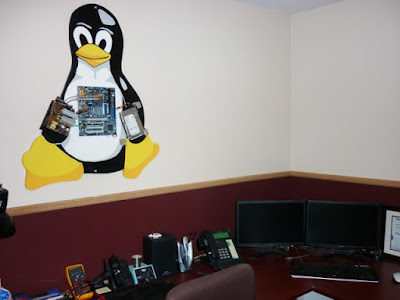 Hot on the heels of news that Google uses toilet water to cool one of its data centers, it has emerged that an enterprising hardware hacker had the same idea some seven years ago. As you will see in the following pictures, though, Jeff Gagnon’s computer is much more than a toilet-cooled rig — it’s a case mod tour de force.
For a start, it doesn’t actually have a case — instead, it has a lovingly hand-cut and -painted (while topless; see below) Tux penguin backboard, which the motherboard, hard drive, and power supply are all nailed to.
Then there’s the CPU waterblock, which has been handmade from a lump of copper and, I presume, an arc welder or a soldering iron. But where does that tubing go, I hear you ask? Where’s the water reservoir, the pump, the radiator?
Well, it just so happens that there’s a toilet on the other side of the wall — and so Gagnon, who is obviously a fan of doing things as gracefully as possible, simply drilled through the wall and put a water pump in the cistern of a toilet. There’s no sign of a radiator: It looks like it’s actually just an open system, with water freely flowing in and out of the cistern. Here’s a quote from Gagnon, on the actual functionality and efficiency of the system:
The more we go to the toilet, the more the CPU heat is going down. With this setup, the CPU heat is about 19 Celsius — very nice! After a weekend out of home (not flushing the toilet for a while), the toilet reservoir is warm and the CPU heat is about 29 Celcius…
The completed system runs ClearOS, a small and medium business-oriented Linux distro based on CentOS and Red Hat. As far as we can tell, the server is affixed to the wall of an office somewhere in . For more photos of the toilet-cooled, caseless masterpiece, Photos Below!! 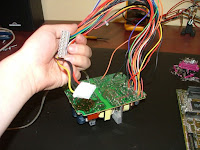 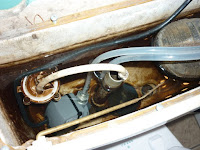 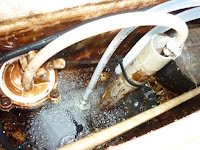 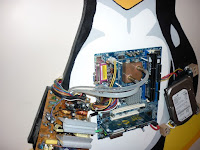 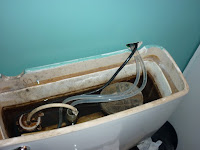