TAKE A TOUR OF THIS NEW SANDBOX CITY!

Forget Michael, don’t give Franklin a second thought, and, as for Trevor…  watch your back, obviously, but that psycho is nothing to worry about -- because the real star in Grand Theft Auto V is Los Santos. Rockstar has proved to be something of an expert at realising cities, even entire states, but GTA V's Los Santos is its most ambitious project yet. And while the game map doesn't encompass three entire cities as it did in San Andreas, according to Rockstar it’s the most varied, densely populated and believable landscape it has ever created.
Liberty City felt like a proper city, a vast expanse divided into distinct districts; the wealthy excess of Algonquin was in stark contrast to the deprived neighborhoods of Bohan. But from what we've seen so far, Los Santos makes Liberty City look a little two-dimensional by comparison. It’s not just large -- the city of Los Santos alone is comparable in size to the whole of Liberty City, and that doesn't take into account the surrounding areas -- but it’s diverse, too. 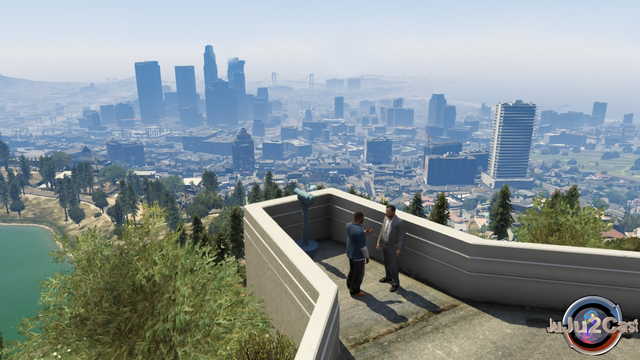 Overlooking Los Santos, including views of Downtown and GTA's equivalent of Echo Park.

Rockstar has spoken briefly about the huge swathes of countryside that have been hinted at in the trailers. These feature rolling hills peppered with wind farms and oil derricks, enlivened by the kind of indigenous wildlife you’d expect to find in the barren wastelands surrounding Los Angeles. Are we likely to see bears, bobcats, mountain lions and eagles? Most likely, but we’ll definitely come face-to-face with rednecks like Trevor who haunt the backwaters beyond the bright lights of the big city. Rockstar hasn’t officially confirmed what we’ll find in them thar hills, but if the intention is to create an eco-system that fits with its surroundings then venturing out into the outback with nothing more than hiking boots and a backpack could land you in hot water.
Perhaps the most impressive aspect of Los Santos revealed so far is the diversity within the city itself. Obviously it’s based on LA but it’s certainly not a 1:1 copy -- rather a compressed interpretation that features many of the districts and landmarks associated with the City of Angels. From the handful of screens and two trailers, eagle-eyed GTA fans will be able to pick out equivalents of the Griffith Observatory, Echo Park, The Forum, and much more. There’s the Richman Hotel, which looks uncannily like the Beverly Hilton Hotel, and Del Perro pier is to all intents and purposes the Santa Monica pier, complete with Ferris wheel and fairground. 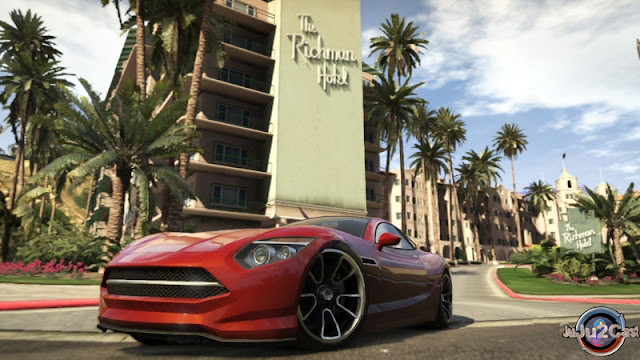 It takes a rich man to stay at the Richman.

Importantly, each area feels distinctly different from the next. Take Rockford Hills, Grand Theft Auto V’s equivalent of Beverly Hills and home to one of the game’s protagonists, Michael. It’s the epitome of the glamorous excess of Los Angeles, with vast, gated villas with pools and tennis courts dotted along tree-lined streets that snake up into the hills. Think the Kardashians, complete with high-end sports cars and dysfunctional families.
At the opposite end of the scale is Blaine County, which is where we first find Trevor. It’s a dusty, barren wasteland where not much happens. There are trailer parks, gas stations and roadside bars, home to bikers and junkies, both of whom appear to be high up on Trevor’s hit-list if the second trailer is anything to go by. 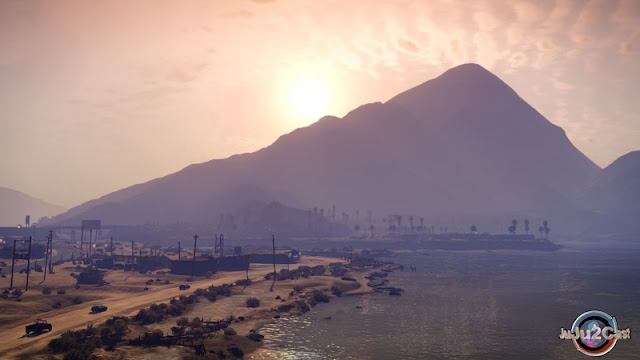 Blaine County looks like a mix between the Salton Sea region, Antelope Valley and Lake Powell.

Despite its dirt-bag inhabitants, Blaine County has a hidden beauty in the form of Mount Chiliad and, at the bottom of its slopes, the Alamo Sea. Presumably based on the Salton Seas, situated on California’s San Andreas rift, the Alamo Sea is a putrid, salt-rich lake whose waters are unlikely to be home to anything you’d want to go fishing for. Sure, we’d all rather swim in the cyan-blue oceans off the coast of Vespucci beach, but the idea you’re free to roam anywhere, from the deepest lows to the highest peaks, has always been one of Grand Theft Auto’s charms.
Speaking of peaks, Mount Chiliad is the stand-out landmark in Blaine County and the towering mountain is apparently the highest point in the game, taller than any of the skyscrapers in downtown Los Santos. Again, Rockstar has only teased fleeting glimpses of Mount Chiliad but one thing’s for certain: walking to the top -- or even mountain biking, which is definitely in the game -- will take a very long time. 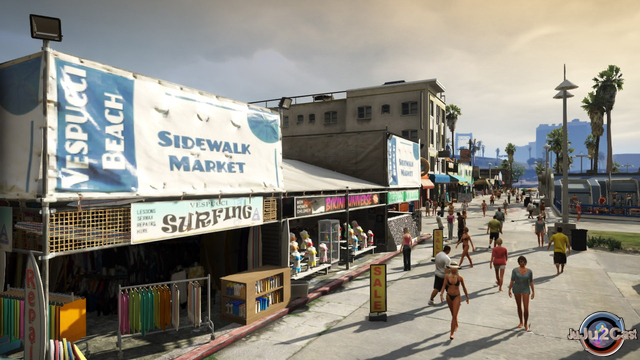 Vespucci Beach is an amalgamation of Venice Beach and Santa Monica.

Then there’s Vespucci Beach, which combines the beatnik vibe of Venice Beach with the tourist-friendly streets of Santa Monica. This is where we first meet Franklin, who emerges from a shop that sells ‘herbal remedies’. The promenade is all surf shacks and flea markets, plus it’s home to open air gym Muscle Sands, where all of the beautiful people of Los Santos go to pose and work out.
On the opposite side of the city is Downtown, which is immediately recognisable by the cluster of skyscrapers at its heart -- these provided the backdrop to the first mission we played. On the surface Downtown looks much like Algonquin, the glass high-rises and suited businessmen reflecting the district’s financial roots. But there’s also a less salubrious side to Downtown, with scores of homeless bums camping out in graffiti-covered underpasses.
Then of course there’s Vinewood, overlooked by GTA’s homage to the Hollywood sign. It’s a place where people come to live out their dreams, but the reality is very different and for every high roller there are a dozen wannabes forced to live at the bottom of the food chain. 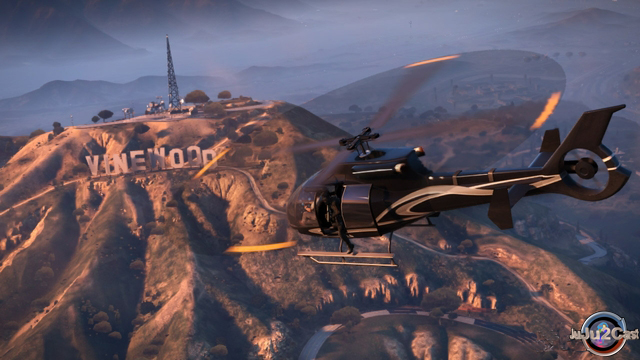 A helicopter is the best way to take in the sights of Los Santos.

Linking all of the districts together is a complex network of roads and freeways, many of which will once again be familiar to anyone who has a passing knowledge of Los Angeles. The Del Perro freeway cuts from the east to west, while the Los Puerta freeway goes from north to south with links to Downtown via Little Seoul, presumably Grand Theft Auto V’s take on Koreatown.
Even though Los Santos feels familiar if you know LA, we’ve probably seen less than one percent of what will make up the final game. We’ve basked in the crystal-clear waters of the Zancudo river, which weaves through the mountains, and done a fly-by of Grapeseed’s agricultural farmlands, but at this point we’re only able to speculate about what lies beyond the bird’s-eye view. We know there are biplanes, jets, and helicopters in the game, but so far we've not seen so much as a glimpse of a runway, let alone an entire airport.
Los Santos is a city with many sides. How we’ll discover everything it has to offer remains to be seen, and no doubt we’ll see more of its undiscovered beauty in the coming months. But the whistle-stop tour we've currently had, taking in the affluence of Rockford Hills to the run-down trailer parks of Blaine County and beyond, all set beneath a sun-drenched sky, keeping everyone wanting more!