Minecraft Vita Is Out Now Go Download It NOW!

NOTE: A 1ST GAMEPLAY VIDEO WILL COME LATER THIS WEEK! 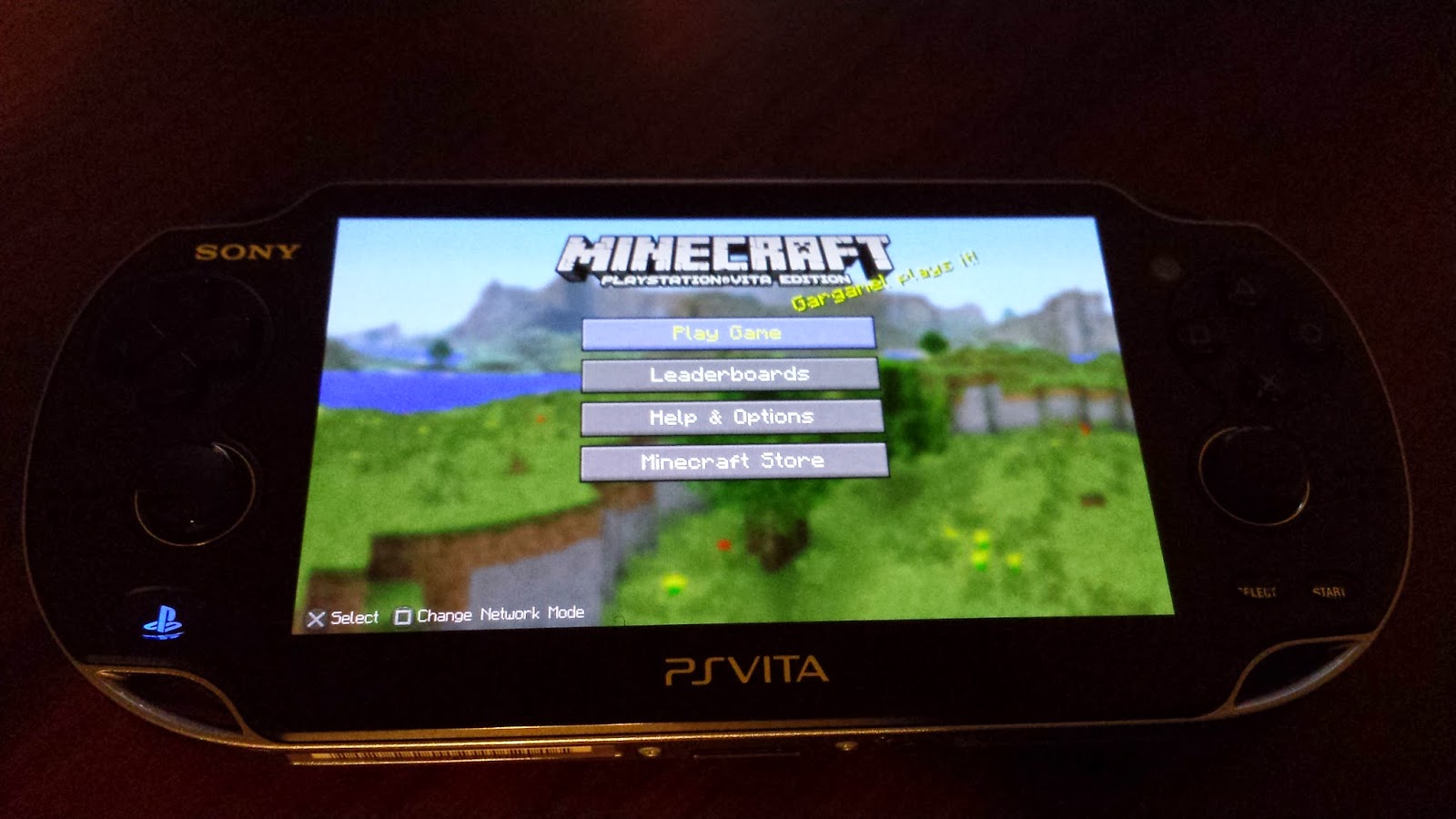 Sony and 4JStudios have FINALLY released Minecraft for the Playstation Vita System today!
I Mr. Mike have downloaded the PSVita digital version with promise of Digital Legoness, Fun, Excitement, Creation, Exploration, and Awesome worlds to explore.

Well...... I wasn't disappointed at all, easily got and downloaded my cross-buy version of the game from my PS3 purchase a few days ago flawlessly!

After starting to load up the game for the first time I was a bit afraid due to the fact it took a bit to load on my Vita, note this was only for the first time you load the game up understandable.
Instead of going through the same old tutorial again and again, I decided to just skip that BS and started to create my custom world.  When put to the task in naming my world I had only one choice JuJutopia! and created my custom world seed that would unlock my adventure of a lifetime, then to choose my difficulty hmmmmmm...

Well not to seem like a noob or a gaming baby or anything I choose to start off with the creative mode in the simple notion that I wanted to start off on the right track 1st off. And not to just get head deep in any shit, also I don't care about Playstation trophies ONLY Xbox Achievements dog!
So I'm not pressured or tasked into trying to get them, that's what my XboxOne copy is for lol.  No worries though I will be turning that mode into adventure soon just wanted to build my fortress with lava moat first and maybe get a nice suit on, That's all nothing else! I Mean It!!

Now back to the brass tacks, I love Minecraft YES I'm 28 years old and I Love Minecraft!
Getting loaded into the world for the first time on my Vita was fast and beautiful, everything looked great and just like I remembered on PC!! or Xbox whatever you want.  Starting off to move my Steve character for the first time I did notice a quick loading stutter in the game but that quickly went away and I went on my merry cow and pig killing way.  Using the controls are as you should expect from an amazing portable Minecraft game with both analog sticks for movement (Left) and looking around motion (Right). To chop or dig clicking the (R) button does the job and the (L) button is for Placing items like blocks where you want them. The (Right & Left) buttons scroll through your items but the left stick can also do the task. The (Up) button changes the character view from 1st to 3rd person and the (Down) button helps your Steve crouch and stick to objects. The (X) button is to jump and the (Square) button is to go to your inventory, (Triangle) is to bring up your character/mini inventory, and (Circle) is to go back. Now there is some touch features but nothing to worry about, the front touch is only used to select items if you want and to enter keyboard words. The rear touch to my best knowledge has nothing unless you change the controls.

Menus and saving in the game are fast and fluent but I never did play online yet with anyone....YET!
I saw that a person can play 2-4 players on Vita to Vita mode, and 2 -8 on online mode but still note I personally haven't tested those settings yet but will soon.

All in all to this quick launch Review I'm totally enjoying my portable Minecraft experience, everything I needed is in this just like the last-gen console editions with big maps to boot. I was whizzing through the Minecraft sky trying to see how far the world went and its quite big enough for little old me and can work well with up to 8 people, I see no problems with that unless draw distances become a problem, Note the draw distance is quite short but still good enough for someone like me. I'll have to wait and see when I tear into the world and build tons-O-shit to see how the game runs and reacts down the road.

And a big fan I can be one sided, but this is a great game for anyone with a vita, loves to create and have fun, Remember this is a Giant Digital Lego Box!

My 1st impression rating on this game will have to be the following:
****/ 1/2 Stars out of 5 Stars for Minecraft Vita
(A half a star was taken off for the sluggish draw distance)

Any questions, comments, etc. Contact me through the following!