Its only 5 or less days away now until one of the largest most anticipated franchise game's comes out.
Grand Theft Auto is one of those games that you can just get into and play for hours around the clock.   And when finally finished with mostly everything in the game you just keep coming for more!
I find myself never wanting to leave this creative sandbox, coming back for more through out each month.  Is this typical?  Is this something other gamers do?  What other franchises do people keep the game  instead of trading it in after completion?  I'm guessing not many not many at all.
GTA is just one of those games that can get revisited over and over again, finding new objectives to do or fooling around in or just to see how long you can stand against the law before they do you in or you get away!
Remember this was all started by a little company called DMC aka now Rockstar Games.  The evolution was great, first a 2D top down game, then by GTA III it became a 3D polygonal open world sandbox amazement.  With real music in the form of stations to speaking dialogs.
GTA became the game every up tight parent or old political persons nightmare and scape goat.
Sure Rockstar likes to push their games over the top a bit, but that's how they do things. And sure again sometimes it went a little far but no biggie that's how they sell the game. It is called Grand Theft Auto you know.. right?!  Well after 3 successful console games sold GTA 3, Vice City, & San Andreas the 3D era of the series as it is called now came to a close.
A few portable GTAs were made along the way but it would be like 2 - 3 years till we seen a new GTA hit our consoles again. Then along came the HD era of Grand Theft Auto IV which took us back to Liberty City.  Bigger, more dynamic, more vehicles, & an all new HD look. Realistic enough to get people really excited when it hit store shelves for the Xbox 360 & PS3 & 2 expansions after.
Now at the end of this HD console run with new Next-Gen machines around the corner in November,  a new GTA game will soon emerge.  Grand Theft Auto V will feature a much much larger sandbox than it's predecessors, a even more realistic look, & for the first time in GTA games not one, not two, but three main characters will be featured in the game at once.  More stuff to do not even including the 100+ hrs of story missions, & a later inclusion of a multiplayer mode for GTA Online for all friends to have fun in.
This will show a last big hoorah for this generation and show how good any game can look today.  Some have said that this game don't look that good, some said where's the hype, & some said they might pass it by. But If I know anything about these people I know they will give in and play this game. Yep I know they will give in.
For me Mr. Mike what will I do when I first enter GTA 5? I mean beyond the ceremonial unboxing of the collector's edition video I have to do & the 1st gameplay video well IDK?  I plan just to play most of the story at 1st then get into some mischief around the map.  Stealing planes, trains, & tanks causing ultimate chaos all around until being gunned down by authorities.  Ah I do love GTA games they always make you feel like your getting much more than you pay for and yes they do.
Before I keep rambling on here all I know is that this GTA was a long time coming and it won't disappoint.  Other Next-Gen titles like Dead Rising 3 and WatchDogs  have their own unique aspects on open world gaming. Even though WatchDogs is kind of going beyond what GTA is doing with hacking, GTA has its own. We will see down the road if GTA or WatchDogs take the top spot. Right now its GTA.
Grand Theft Auto 5 releases on: Sept/17/2013
Rated: M
On: Xbox360 & PS3 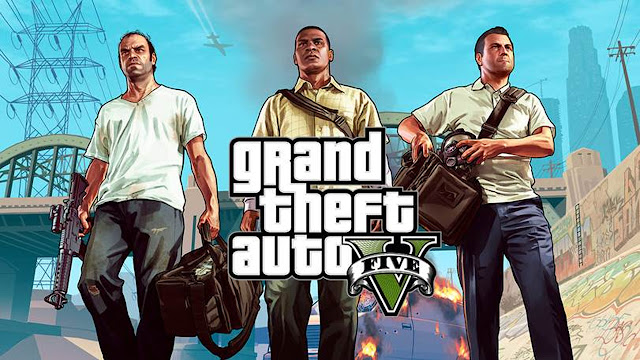