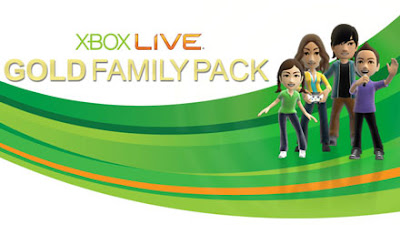 Microsoft revealed that it will dissolve its existing Xbox Live Gold Family Pack on August 27, 2013. Accounts linked to a Family Pack will convert into individual accounts "to prepare for new upcoming features on Xbox Live Gold."

Here's what that means for you Xbox Family Members.

Microsoft confirmed that each member of the Family Pack will keep the full membership term -- so if you had 10 months left, everyone in the Family Pack gets 10 months on their individual profiles.
In addition, anyone affected by the change here will receive three extra months of Xbox Live Gold. Activity monitoring reports and Microsoft Points allowances are going away, but those are the only Family Pack features you won't have access to as of August 27.

"Before your memberships convert, you can still add family members to your Xbox Live Gold Family Pack, for a total of up to four accounts," a Microsoft email notification says. "However, any unassigned secondary accounts will no longer be accessible after your conversion. Please be sure to update your secondary accounts here."

Unfortunately, this means families with numerous Xbox 360 consoles in their home will need to pay for separate Gold memberships starting later this month, as opposed to the cheaper bundled price of the Family Pack. The alternative is to take advantage of Xbox One's new Home Gold features.