Arnold Schwarzenegger Almost Not A Terminator! 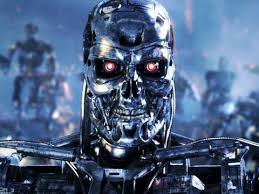 Arnold Schwarzenegger's new memoir Total Recall is out now, and there's an interesting excerpt that details the actor's experience working on James Cameron's The Terminator. In the book, the actor describes how he almost didn't take the job. At the time, Schwarzenegger was working to build his career around more heroic roles and didn't want to reverse his image by playing a bad guy.
Nevertheless, when he sat down with Cameron for lunch to discuss the film, he certainly seemed to have a few ideas of his own about the killer cyborg. "I told Cameron: 'One thing that concerns me is that whoever is playing the Terminator, if it's O.J. Simpson or whoever, it's very important that he gets trained the right way,'" Schwarzenegger says in the book. "Because if this guy is really a machine, he won't blink when he shoots.
"'When he loads a new magazine into his gun, he won't have to look because a machine will be doing it, a computer. When he kills, there will be absolutely no expression on the face, not joy, not victory, not anything.' No thinking, no blinking, no thought, just action."

However, once he was convinced to take the gig, Schwarzenegger took the role very seriously. "I worked with guns every day before we filmed, and for the first two weeks of filming I practiced stripping and reassembling them blindfolded until the motions were automatic. I spent endless hours at the shooting range, learning techniques for a whole arsenal of different weapons, getting used to their noise so that I wouldn't blink."
Of course, Schwarzenegger did admit that it wasn't all smooth sailing when it came to shooting. "Our biggest disagreement was about 'I'll be back,'" he continued. "That... scene took a long time to shoot because I was arguing for 'I will be back.' I felt the line would sound more machine-like and menacing without the contraction.
"'Let's stick with I'll,' [Cameron] said. But I wasn't ready to let it go, and we went back and forth. Finally Jim yelled, 'Look, just trust me, OK? I don't tell you how to act, and you don't tell me how to write.' And we shot it as written in the script."