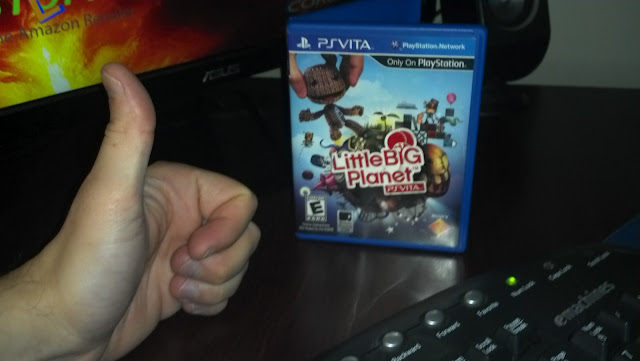 Update: Sony has confirmed that it authorized retailers to sell LittleBigPlanet Vita earlier than its original September 25th release date. Sony's Eric Levine notes that "production on LittleBigPlanet PlayStation Vita was completed earlier than expected, and due to the excitement from our retail partners, some have decided to put it on shelves as soon as the product was received."
He also writes that LittleBigPlanet Vita's online functionality -- currently not working -- will be turned on this Tuesday, September 18th.


ORIGINAL STORY: Over in video game land called GameStop AkA "Power To The Players" here at least in the USA has just dropped a bombshell of awesomeness at least to me.  The original story stated by IGN when I was searching the inter web yesterday was stating that GameStop had broken street date and is now selling LBP Vita in limited quantities around the US. :IGN STORY: But in reality that story was not all true, in reality now & my story I was contacted by my local Gamestop and was told by the digital GS lady that my LBP Vita PreOrder was ready to be picked up, NOTE: This was before I read the IGN story! So I was dumb founded and decided to call GameStop to find out if the digital lady was correct in her statement.  The guy said hold on and began rummaging through boxes through out the store room Note Again stating that they had lots of Borderlands 2 boxes LoL I laughed. He finally stated he found a smaller Sony box and opened it and sure enough it was a PS3 wand WTF LoL just kidding it was copies of LBP Vita. I stated that I would be right over to pick it up with a hour left for GS to be still open! Im only a few blocks away so no worries to me.

I got there and went into the shop the young GameStop guy knew it was me "I am a celebrity" Lol again. I asked the GS employees why GS broke street date on LBP Vita? They then stated No they had not he began to show me the database emails from Sony and GameStop headquarters, stating that they were allowed to start selling and distributing LBP Vita now instead of the original Sept 25th release date. So there you have it Little Big Planet Vita is now out for all of you creative love to have fun types out there Vita has been blessed with greatness early everyone.
So after my purchase which I preordered only 3 days before I said to the GS employees that an article on IGN stated that GameStop had broken street date even though this was not the case. An email from Sony themselves tells all sorry I did not get a copy of that email I was in a hurry to play this game everyone, you just have to trust me on this one. So what a small little adventure I had, I started to play the game reading reviews on lots of game sites stating they love this game and it really makes the Vita a must have handheld to get for. Here is IGN's Review.

I will have my own little video review on Little Big Planet Vita in a bit after I get enough play with it so soon. Right now Gamestop is the only retailer that has LBP Vita for sale everyone else states coming soon with the 25th release date. take a quick look see below. I checked all my big retailers to see NewEgg.com, Amazon.com, BestBuy.com, Walmart.com, Gamestop.com, Target.com. And only the GS Site shows it for sale now with limited quantities!

Wonder why this happened but if GameStop and companies like Sony do this kind of thing in the future I will love them for it, why wait if the game or system is ready I don't know.... 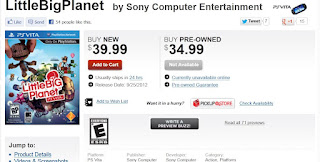 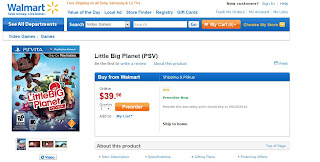 Any comments or questions email us @ corecast2011@gmail.com