Well Just Keep on Waiting And Dreaming! Unless Your In Kansas City....


CHECK OUT THIS GOOGLE FIBER PRESENTATION! 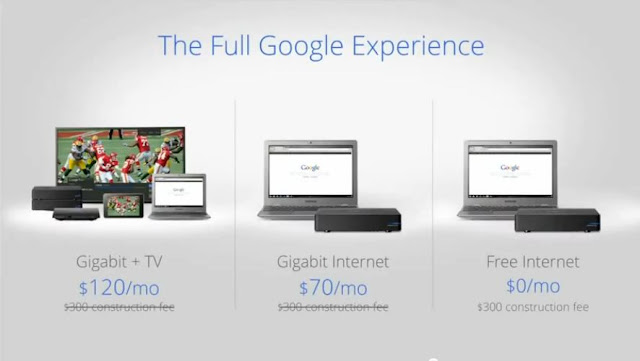 Google is gearing up to premier its crazy-fast Fiber service, starting with a trial market in Kansas City. The service comes without monthly bandwidth caps or overages, and paid plans come bundled with 1TB of Google Drive cloud storage.

The promotional video for Google Fiber’s KC debut points to average USA broadband speeds as a bottleneck in users’ experience of the web.

Just as the last few years have seen huge expansions in processor speed and storage capacity, Google proposes to multiply home internet connection speeds by 100. “Fiber offers up to 1,000 Mb/sec download and upload,” Google’s “About” page explains. So just to be clear, that means users will be able to download (or upload) any file up to a gigabyte in a second or less.
Google is offering three plans for pre-registration.

Anyone who pays a one-time $300 fee (to cover home fiber-line construction) can have US-average broadband speeds free, guaranteed for at least seven years.

For $70 per month, users can upgrade to gigabit service. That’s the whole monthly price—no introductory rates that double after six months—and that includes the wifi-equipped Network Box. Google will even throw in 1TB of Google Drive cloud storage. Oh, and a two-year contract waives that $300 setup fee.

For $120 per month you get the “whole Google experience.” Again, the network box and 1TB on Google Drive come bundled; and a two-year contract still waives the fiber construction fee. But that $120/mo. will net you all this other stuff too:

Residents in high-demand neighborhoods on both sides of the Kansas-Missourri border have 45 days to pre-register here. The rest of us will have to wait a while longer, although Google will all but certainly expand its fiber network to high-demand urban areas first. The packages listed above are residential only; business prices have yet to be announced. Now Google has stated that they will work to get G Fiber out around the U.S. hopefully meaning Cheektowaga, NY for me because I know I pay way to much for broadband for a 1Mbps Up and 15Mbps down for around $56 per month, now if we or I mean me ha pay $70 at least not including the TV which I would probably get also for 1Gbps both up and down, or the $120 per month for everything! Now I pay $145 for both Roadrunner Internet and Directv no complaints from me but if this Google Fiber does become a true U.S. product and not a test service like Google likes to do, I would like most join up just think of the possibilities!
I Know I Do......