Three Assassin's Creed III special editions have been announced in Europe.
1.
The top-tier version is the Freedom Edition, which will be available for £79.99 on consoles and £59.99 on PC. The Freedom Edition contains a copy of the game in addition to:
2.
One step below the Freedom Edition is the Join or Die Edition. Join or Die will include the Ghost of War mission, Sharpshooter multiplayer package and George Washington's notebook, plus different packaging and an Assassin's medallion. The Join or Die Edition will cost £64.99 on consoles and £34.99 on PC.
3.
Finally, a Special Edition will also be available. Ubisoft didn't mention a price, but the Special Edition will contain an exclusive single-player mission called "A Dangerous Secret." This mission will allow players to "fight against a secret that could jeopardize the funding of the revolution" and offer the opportunity to unlock an exclusive Flintlock Musket.

All three editions have currently only been announced in Europe. Collector's Editions of previous Assassin's Creed games have come to the U.S., and Assassin's Creed III seems like an especially likely candidate given that the game is set in America and prominently features American flags on its packaging. Still, it's worth noting that some Ubisoft special editions have remained European exclusives. 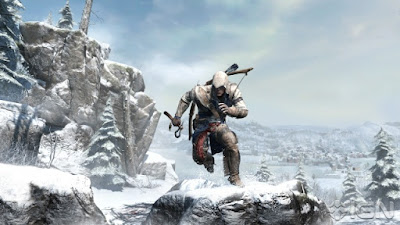