WINDOWS 8 CONSUMER PREVIEW!
(SHOULD YOU PREPARE TO BUY & UPDATE?) 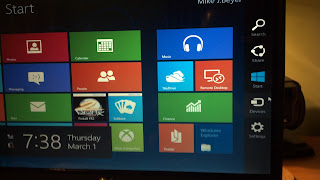 Windows a complete experience to most a complete hassle and very complicated to the rest.  This is a misconception amongst people, people who grew up in the early tech and Windows Era since Windows 1.0, 3.1, 95, 98, NT, 2000, Me, ect. have at least the basic knowledge of how the ever updated OS works & runs.  Most feel that now with Windows 7 me included is the safest, fastest, & most complete OS ever. No matter on how I or you feel we have to agree that Windows has come a long way in the way we use our computers and work today. The fact that even though there is other choices out there for a OS like IOS Macs & Linux most people still gravitate to Windows as their main operating system of choice. Programs are usually faster & more secure on Windows do to its years of patching holes & security vulnerability updates protecting our data and computers from harm. Another reason can be that PCs are made cheaper than Macs due to the lack of the so called customer support which mostly isn’t needed. 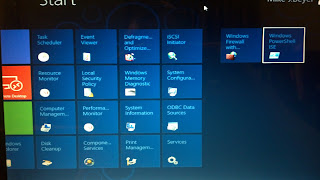 Now with the Windows 8 Consumer Preview out and the final release on its way how will Win8 compare to the now best OS known as Windows 7?  Will this OS be the new way we all use computers, and what about the now support for tablets & ARM chips?  Will Windows 8 be doomed as a Windows Vista parody, or will it be a great new OS for all to upgrade to and use, & is it more easy to use, more secure, & is it supposedly faster & lighter than Windows 7?  All these questions will be answered from my use of Windows 8 from Install to Boot to Use Ect.


Well Well the Windows 8 Consumer Beta already at this time, man I it was not to long ago when I met Windows 7.  So how is the big brother of the unofficially called best OS out today, well I will tell you about that now! 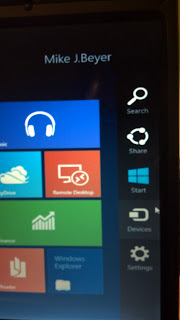 Windows 8 comparing the 32bit 2.52GB version & the 64bit 3.33GB both can be held on one DVD-9 disk easily.  Sure though on my limited test devices like my very old Gateway 1.2 ghz processor 32bit with a 90gb PATA HDD & 1GB DDR2 Memory, yes this is obsolete hardware for sure so caparisons can and will differ from my review/preview.  After going to the http://windows.microsoft.com/en-US/windows-8/consumer-preview  website downloaded the two ISOs even though I will only be using the 32bit version for now you never know. Downloading was average then burning the ISO was fast, now its time to install Windows 8.  Popped in the disk then it ran the system check, after that was finished it went to the setup menu asked for what I wanted to do which for me a full clean install. Then it installed only taking 6-8 minutes which is fast really fast, so here comes next the hardware and other system setups which on this very old laptop and after windows 8 was starting up for the first time it took over a minute and a half, which NOTE MY SLOW OUT OF DATE LAPTOP SINCE VISTA 1! After that the boot up was fast even though it had not shown the new Windows logo but a fish picture which to me is confusing.  Starting up Windows 8 always directly takes you to the Metro interface so if you want to see your desktop tap on the desktop icon.


Microsoft really wants Windows Metro I mean Windows 8 to be an all in one solution to desktop & mobile computing.  At first I had not cared about the gimmicky Metro display but after a while it seems to grow on you especially if you get it on a tablet.


Even though I wish and hope for some Kinect like interface for the computer for Metro a tablet will make it feel right at home.  Each of the Metro Icons are basically apps or programs that come with the PC or can be purchased from the MS Store or installed from disk.  Each of our use to apps or programs are Internet Explorer, Mail, Videos, Music, Pictures, Weather, Xbox Live, Xbox Live Companion, Ect.  So how can you install your regular everyday Windows programs in Windows 8 well the same like you always do man, just pop in the disk or download from the net click install and Windows 8 will add a personalized icon for each program on the Metro interface and the Desktop if you want!  So far all my programs are compatible with Windows 8 even though Microsoft wants to change the way Windows works in the long run. 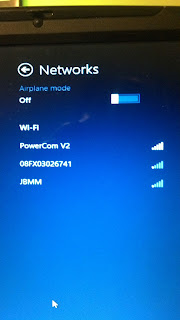 New features or lack of is the well known missing Start button which is now currently hidden in a right side panel if you pan your mouse to the right of the screen. The unofficial Start has your shutdown & Restart Icon unknown if there is a sleep icon maybe it can be activated. There is a power battery level icon, a WiFi panel, settings icon, devices icon, Ect.  Note you will get use to this bit of a space saver.


There is a secure WiFi part to Windows 8 making it easier and better for you to connect to the web or network, and a device setup & connect part for any and all your devices you have connected to your Tablet or PC wired or wireless.  When testing the Win 8 provided apps or my own programs Windows ran fluently very smooth like they should run even on a old piece of junk lol.  There is a tab in the unofficial Start Menu that can enable easy access to the Advanced features of Windows for those experts who like to tweak everything and anything in the OS.

As I have mentioned briefly before Windows 8 is integrating for us Xbox gamers Xbox Live Games and a Xbox Live Companion which Xbox Live Games lets you play games from the online Live Store and earn achievements for those games to your Gamertag.  For the Xbox Live Companion feature which shows live your current xbox gamer status, your friends list and what they are currently up to & chat ect. You can even link up your Xbox360 to your tablet / PC to take control of you Xbox for movies, game startup, anything even though I use a controller for this, this companion app can be a cool idea of what can be done in the future for now I like my Live App to view off my Phone or my tablet.  This is one of the main things Microsoft wanted to integrate into Windows 8 for all current and future entertainment purposes.

Microsoft has certainly made at great effort to implement a plan for a new OS for integrating all there devices using Windows and Metro to run the entire show for entertainment, productivity, use, and business. I just wonder if they are going a bit far for Windows PC users who might not like the new interface and may confuse or disappoint some.  In my opinion I love Windows 7 and I will be ready for Windows 8 but I for now have no real reason to get Windows 8, and I’m sure there are some bugs that still need to be found and worked out In Windows 8.  This is no doubt a good version of Windows for new PC buyers or Builders maybe down the road I will get a deal on a copy of Windows 8 and use it on my PCs but for now I will wait.


In conclusion to this basic inside look into Windows 8 with the Windows 8 Consumer Preview I have basically stated everything that most people want to know about the new OS except maybe for the security which it does have the Windows Firewall and Security Essentials installed for protection from viruses, Trojans, and such.  This is in fact not a revamp of the Windows Vista fiasco but a improved Windows 7 interface with everything you would like it to offer. So don’t worry about integration because this works well with any PC even my old busted slow Laptop with no power at all and it still runs flawlessly.  For the whole Windows 8 on Arm we will have to wait and see if and when any ARM tablets come out into the wild then we will know if it’s the one.  Any other questions like the power used or how tablet / laptop battery life is will have to wait for now, but its resource handling leaves me amazed and could well be what most of us need.  If or when I do get this as a future OS or when I build a new PC for others I will include this as an OS option which anyone should like. Easy Setup CHECK, Fast Startup & shutdown time CHECK, New interface DOUBLE CHECK, but still the same old Windows under the hood for all to use YES! So its up to you if you want to get this as your future new OS for any of your devices for me my choice is clear. Microsoft you have taken the next step and I thank you for it good job!


Like I stated before if you want to download the ISOs for to test on your PC or Laptop go to this link:   http://windows.microsoft.com/en-US/windows-8/consumer-preview


Download the 64Bit or 32Bit editions of Windows 8 & don’t forget the Serial Key below the download to activate Windows. Next Burn to a DVD with your favorite Disk Burning program, install then enjoy!! (NOTE: MAKE SURE YOU BACKUP ANY DATA THAT IS IMPORTANT TO YOU FROM YOU LOCAL MACHINE & TRY NOT TO USE THIS WITH YOUR EVERDAY MACHINE JUST IN CASE!!!)