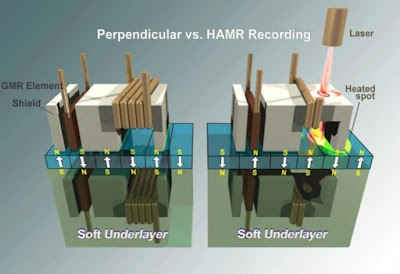 In April 2006 Seagate began shipping the first 3.5" desktop hard drive using Perpendicular Magnetic Recording (PMR) technology and since then PMR has become essential in allowing all of the hard drive manufacturers to create the 2 TB+ drives available today. As we approach the limits of what drive manufacturers are able to do using PMR alone; however, they are starting to look at additional technologies to boost the storage density. One such technology on the horizon is Heat Assisted Magnetic Recording, or HAMR. According to a recent press release, Seagate is not only experimenting with HAMR but is the first drive manufacturer to use HAMR to reach 1 Terabit per square in of areal density. 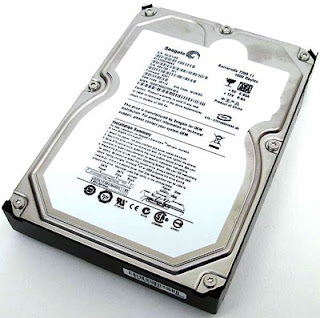 HAMR works by using a laser to heat up the storage medium before the compounds used to store data have their orientation aligned by the write heads of the drive. As bits get smaller and smaller, traditional magnetic recording methods are not strong enough to permanently change the magnetic orientation of the bits, which means that there is an inherent, if theoretical, minimum bit size and corresponding maximum storage density possible with current Perpendicular Magnetic Recording. HAMR further allows drive makers to get around that limitation by heating the physical bits to the point that traditional magnetic write heads can change the orientation.
he current 1 Terabit per square inch achieved using HAMR is also the theoretical maximum storage density for PMR alone (as mentioned above), which is promising as it implies HAMR still has a lot of working room to improve and has matched the maximum proposed for PMR.
Seagate expects to use HAMR to produce 60 TB+ 3.5" and 20 TB+ 2.5" hard drives within the next ten years. To put this areal density in perspective, current 3 TB desktop drives feature approximately 620 Gigabits per square inch while current 750 GB laptop (2.5") drives feature about 500 Gigabits per square inch.  Interestingly, when comparing the 1 Tb/in^2 mechanical drive density to flash (ie SSD) storage at equivalent densities, it works out such that a single bit equals 1nm of flash storage!
Unfortunately, we won't be seeing 60 TB drives any time soon. Rather, Seagate expects 6 TB desktop drives and 2 TB laptop drives to be the most immediate benefits of the heat assisted recording technology. Still, as my 2 TB drive is filling up more quickly than I ever imagined (thanks to working with HD video and making regular backups of data), I welcome as much increased storage as I can get!